The weather promised to be lovely, the guidebooks were tired of sitting in the corner and so we took an opportunity to get away for a few days. North Wales has become our favourite destination in the last few months – it’s seemingly close, yet has a completely different dynamic, allowing us to rest from things we deal with on a daily basis.

I find that with every new visit I discover more and more things I like about North Wales, it becomes more homely, more familiar. We were not too lucky with the weather for the first two days – despite no rain being forecast we were blessed with short but intense showers, so instead we explored local woodlands and nature reserves. Ian’s recent new interest in foraging paid off, adding mushrooms and blackberries to our dinner, and I found lovely spaces to practice yoga. At home I often find excuses to delay the practice, with to-do lists growing, my mind drifting off and moving on to the next worry. In the woods, however, it feels right, it feels like I need to make time for it. The scenery was just lending itself to it perfectly.

The Hills Are Alive

The first two nights we enjoyed barbecue roasted tawny funnels – very similar in taste to oyster mushrooms, actually. They require little to no seasoning, which makes them perfect for a grill. As well as edible mushrooms, we discovered many other species, most of which were either inedible or unfamiliar to us. On the last day we came across a huge ring of giant funnels, and despite the fact we foraged enough of them to feed us for a week, we barely disturbed 5% of all that was there. Chestnuts weren’t in season but blackberries were everywhere! We repeated the feat of making a delicious crumble on a camping barbecue, this time with apples and berries.

Tawny funnels on a barbecue.

We did manage to fit in some climbing on the last two days. We didn’t go after the grades since we went on this trip to relax and get away from stresses, but we did discover a couple of lovely crags. One of the days we spent some time climbing the flowstone wall in Penmaen Head, and even got to meet other climbers. It was my first experience climbing on flowstone, it’s certainly got its own style, and would probably take me some time to get used to it. The other crag we went to was Dyserth Slabs, a few neatly lined up climbs in what used to be a quarry. We didn’t have too much time since we wanted to get back to Birmingham at a sensible time so we just played with the easiest lines, and Ian might have dared me to climb down one of them, collecting gear on my way past. 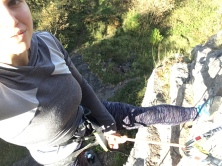 If you happen to plan a sport climbing trip to North Wales, A55 guidebook is your best bet – it’s fairly up-to-date, it’s accurate, and most crags listed in the book have a short approach. Dinarth Hall Caravan Park is open to campers until the end of October, oh and it has horses. And a pig.