Where do I even start? I must say, this had been the best Font trip to date, for many reasons. I feel inspired, ready to train in preparation for the next trip, as well as continue my yoga practice, and work on my nutritional awareness.

We were absolutely blessed (or cursed, depending on how you look at it) with good weather – it stayed dry and warm, and when it got too sunny we’d pick an area in the woods, or somewhere withplenty of overhangs. I had certain reservations with this trip – last time I was in Font, I completed my hardest climb at the time, a f6a+ roof with a bastard of a topout, and had been getting increasinly more anxious coming up to the trip, worrying I wouldn’t be quite so successful this time. Turns out, my concerns were unfounded, and as much as I struggled with most slab climbs, I managed to bag two lovely sends on an overhang. The first f6a happened in Franchard Cuisiniere area, almost as we were about to head back – holds were slopey but overall positive, and dare I say it was a pleasant climb. I did bang my face on the rock reaching a bit too eagerly for the next hold, though. My second hard climb was at J.A. Martin area – again, an overhang with a tough topout. Luckily for me, it was the kind of climb where being short actually helps you with the topout – while Ian and Ben both found it significantly harder and had to employ some alternative beta. 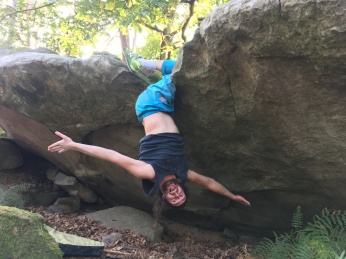 Being away from home also meant I had plenty of time for yoga, so after I’d exhaust my fingers, or calves(you know what slabs are like), I’d find a flat surface to settle on, and took some time for my personal practice. It really helped me to stay calm if climbing had been frustrating on the day, and gave me an opportunity to stretch out if my muscles were sore.

It should be noted that this font trip had been the healthiest one so far. It hasn’t always been so easy to find plantbased food when you’re in France, but that situation improved dramatically since our visit last year. Traditionally, we’d cook dinner from scratch, and rely on local boulangeries to sustain ourselves throughout morning and afternoon. This time, we didn’t eat nearly as much bread as we used to – mainly having it for lunch with things like hummus, guacamole, vegetable pate, sundried tomato paste etc., or on other days preparing a pasta salad or some grilled vegetable couscous the day before. Instead of sandwiches, we had porridge for breakfast, and in the evening, cook a wholesome dish to share between the three of us. We were pleasantly surprised by a large amount of edible mushrooms growing around Fintainebleau this year, and we even managed to forage some chestnuts and apples. Mushrooms made a beautiful stroganoff, chestnuts were simply roasted on the fire, and as for the apples… we somehow managed to create a sugar-free vegan apple crumble using a gas burner and a barbecue. 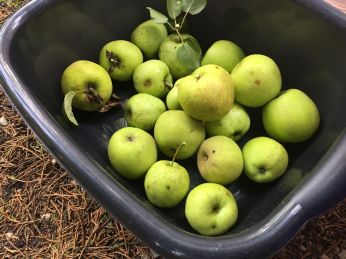 During the day, we mostly drank water and coffee, and to be perfectly honest, we consumed much less alcohol than we usually do on a climbing trip like that. We managed to get a decent amount of sleep every night, and we fit a lot of physical activity into our days. Aforementioned climbing and yoga, of course, but also carrying all of the equipment to crags, warming up by running through kids’ circuits, slacklining, and even playing a game of disc golf. My anxiety was at bay the whole time – the company was just right, and everything contributed to a lovely, peaceful, and enjoyable holiday. 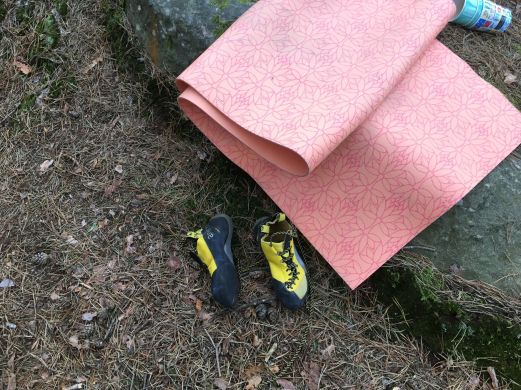